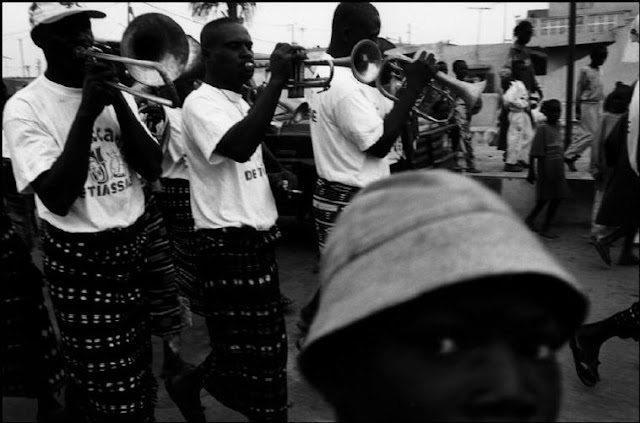 My favorite musical legacy of colonialism is the brass band.  Along with tuberculosis, colonial militaries and missionaries spread the glorious sound of brass ensembles.  A lot of research has been done on the history of brass bands throughout the world, including a growing body of publications on African brass band traditions.  And there are also some wonderful recordings of brass band traditions from throughout the world, again including from sub-Saharan Africa, (these are my favorite compilations).  This post shares three brass band cassettes, one from Ghana, another from the Cote D'Ivoire, and a third from the Democratic Republic of the Congo.

The Aflao Brass Band are from the town of Aflao, in eastern Ghana, on the border with Togo.  They have released at least two cassettes.  The cassette featured in this post is 'Kale Hawo', the band performs brass band arrangements of Agbadja and Kinka, both Ewe musical styles.  This is a studio recording with a great percussion section driving the brass soloists.

Les Saccadés are a brass band from the town of Tiassalékro, in the commune of Tiassalé, Cote D'Ivoire.  They have also released at least two recordings, one of which is available elsewhere on our worldwide web.  I think this cassette is an earlier recording.  The group has performed at the St. Louis Jazz festival in St. Louis, Sénégal, and for national events in the Cote D'Ivoire. I purchased this third recording, a cassette dub, in Kinshasa.  The only marking on the cassette is Konono-Fanfare.  I, frustratingly, can't tell you anything else about this cassette.  I don't think this is a studio recording. (It sounds like a microphone or boombox was placed close to the bass drum during a performance.)

Finally, here is a wonderful short, and fuzzy, clip of a brass band getting it done in Madagascar.  (I will post some recordings of blissful Malagasy brass bands in the future).


If you are hankering for more brass band music, read through this wonderful piece by our friend Alastair Johnston at Muzikifan.  The pictures of Les Saccadés of Tiassalé are part of a series of photos shot by Guy le Guerrec at the St. Louis Jazz Festival.