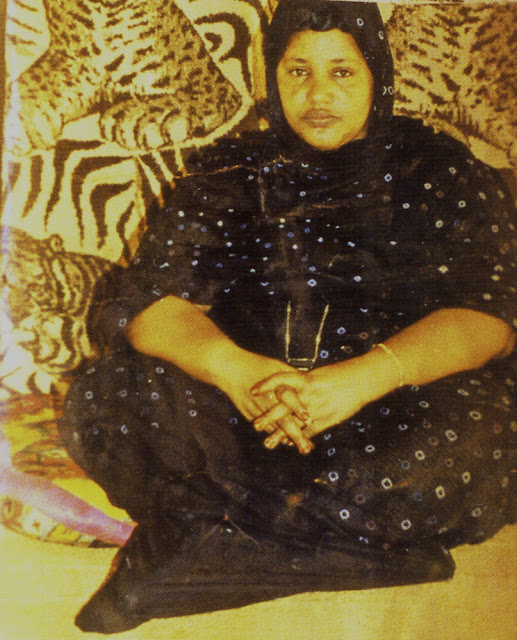 Néma mint Choueikh is one of the Islamic Republic of Mauritania's iconic singers.  Born into one of the great artistic families of southeastern Mauritania (Trarza region), Néma has been a regular presence on Mauritanian radio, and later television, since the 1970s.  She is the embodiment of the hawl, an older style of intimate music that was sung for small gatherings of friends under a khayma (the typical nomadic tent).  Néma has one of the most recognizable voices in Mauritania and continues to perform.

In 2002, the Mauritanian director Aberrahmane Sissako featured Néma in his film Heremakono, which was screened at that year's Cannes film festival.  The film brought Néma to the attention of Günter Gretz, who travelled to Mauritania to record a session with Néma.  This session was released on Günter's Popular African Music label in 2004.  This is Néma's only commercially released recording.

The recording featured below is the best Néma recording I have heard.  This is a set of eight songs that Néma recorded in the Radio Mauritania studios in Nouakchott, most likely in the 1970s.  My copy of the recording is a high resolution transfer from the original reel (this reel is part of the same collection as this fantastic Cheikh ould Abba recording).  This performance is all melody, featuring Néma and her ardin.  This is music for close listening.  There are no dance rhythms, only vocal improvisations and ardin melodies.  In the opening selection, Néma sings the praises of her half-sister Mahjouba mint Meidah, perhaps the greatest female singer from the 'Trarza school'.  In several of the later selections a poet feeds Néma verses that she transforms into melodies.

This second video features a more recent television appearance by Néma, accompanied by a young Lemrabet ould Nghdley on guitar.  Lemrabet has become one of the most in demand guitar players in Nouakchott, his most steady gigs are accompanying Ooleya mint Amartichitt or her daughter Mneitou mint Nevrou.

The picture of Néma was taken from the liner notes to the Popular African Music CD.