May 16, 2020
This post brings us back to the Senegal river valley, like the Niger and the mighty Mississippi, one of Africa's richest musical floodplains.

Abou Dioubba Deh was born in 1968, in the village of Ndiayène-Wadabé, south of the commercial center of Podor--home to the region's most famous artist, Baaba Maal.  Abou Diouba grew up singing with the nyanyourou (one-string fiddle) ensembles that performed for village ceremonies.  In his mid-teens he struck out for adventure with his friend Djiby Baidi Dia, performing throughout the Senegal river valley.  Abou Dioubba's reputation soon spread from the valley to Nouakchott and Dakar.  In 1992, he went into a Dakar studio and recorded enough songs to release Poulo Gaynanko, his debut cassette.  Over the next ten years he released six more cassettes and become Senegal and Mauritania's most popular Halpulaar singer after Baaba Maal.  During these years he travelled throughout the Halpulaar diaspora, performing in the Gambia, Cote d'Ivoire, Mali, Benin, Togo, Congo, Gabon, France, Belgium, Spain, and the Netherlands. 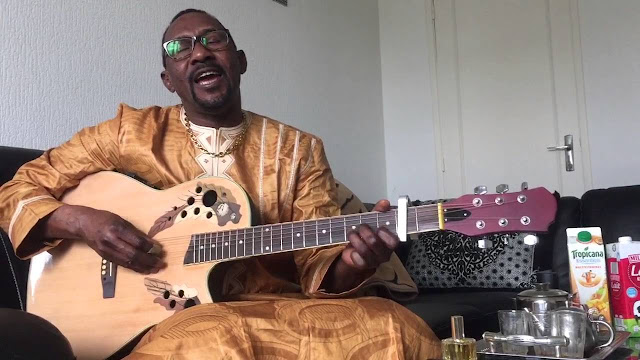 In 2003, Abou Dioubba's wife passed away.  This was the first in a series of unfortunate events that hobbled his career for much of the next ten years.  In 2005, his father passed away and, in 2008, Abou Dioubba fell seriously ill, requiring medical treatment in Europe.  He relaunched his career in 2013, with triumphant concerts in Nouakchott and Dakar. Abou Dioubba Deh continues to perform.  In 2018, another gala event was organized to celebrate his career, and birthday, with Senegal's biggest stars, Youssou Ndour and Baaba Maal, singing his praises.

This cassette is a boombox recording of an evening of music in Rosso, the busiest point on the Senegal-Mauritania border.  [Rosso spreads across both sides of the border. I don't know if this performance was recorded in Rosso, Senegal, or Mauritania.]  Abou Dioubba Deh performs for a small group of friends, accompanying himself on acoustic guitar.  The songs unfold leisurely, punctuated by commentary and conversation.  If you enjoyed these previous posts you should appreciate this recording.

If you would like to listen to some of Abou Dioubba Deh's studio recordings, John at Likembe has shared his second cassette.